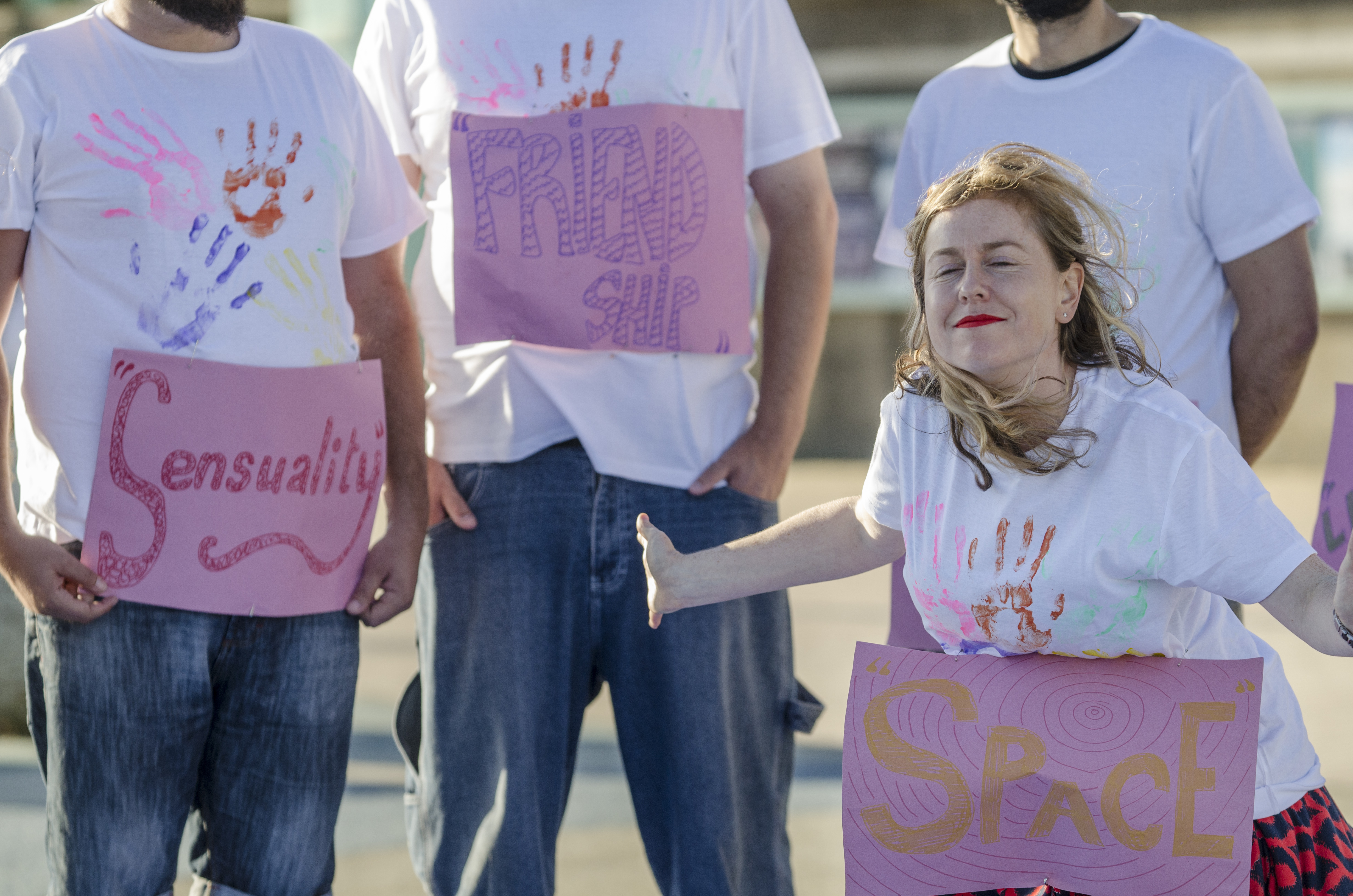 We began on a beautiful Saturday morning, with a clear blue sky and shining sun. Our friends from India, fresh from organising four days of street theatre performances in Kolkata a month previously, joined UK-based research team members at the Phoenix Community Centre near central Brighton. After our 4 participants arrived we relaxed with some tea, coffee and juice as we got to know each other a little.

As part of Sumita’s ‘I Script My Script’ process, the first step was to begin connecting with and trusting other participants. Even for the 3 members of the research team who were taking part and who already knew each other, sharing our personal thoughts and experiences and taking part in these public performances could be a big step! In pairs we chatted to find out one interesting thing about the other person (we found out there were many interesting things!) before taking part in some trust games to help us become comfortable and confident as a group, able to rely on one another.

Next, Sumita coached us into understanding how to develop a script as a group – without us even knowing it! We were arranged into small groups, with each group assigned 3 words such as ‘dog’, ‘door’ and ‘disc’, and a genre such as ‘scary story’. We then wrote out a scene of this genre including these 3 words. Participants found this fun and we enjoyed being creative in a small group… but the real challenge came when we had to merge all three groups’ words and stories! The final story was utterly surreal involving a train crash, a dog and a toad in love, and an amulet grown from a magical tree – but it really captured the incredible, freewheeling creativity of the participants!

Once this step was completed, we had a break for lunch (thanks to Lunch Positive for supplying us!) and realised that Sumita had shown us how to work creatively as a group. It was then that we began to consider this idea of a ‘liveable life’ for LGBTQ people. Working by ourselves, we wrote our own answers to three questions posed by Sumita:

Some of us read parts of what we’d written aloud, and Sumita began to draw out some of the key words and themes from the stories, ideas and experiences we shared – such as identities, acceptance, freedom and representation. Working together, the group of participants came up with three scenes to explore and communicate these ideas. First, a TV game show in which the host would invite one player to guess about the identities of other players. We included some expected identities like ‘lesbian’ and ‘queer’, but also others such as ‘taxi driver’ and ‘vegetarian’, less obvious descriptions like ‘fragile’, and a couple of completely surreal ones like ‘toad’ and ‘acid rain’! We wanted to show how ridiculous it was to make assumptions about someone’s identity just from looking at them. Second, we came up with a scene in which some participants would create ‘boxes’ with their bodies labelled with these identities, while others would be trapped inside the boxes and the rest of the participants would try to pull them out! They would be challenged by a robotic ‘Inspector’ who would insist that everyone stay in their assigned boxes. Finally we wanted to highlight our connections as LGBTQ people, so we decided to use chalk to draw overlapping circles on the ground, each centred on a participant with various identities spread amongst them.

Unfortunately at this stage, one of our participants became unwell and had to leave. We decided to cut our performance back to just one scene, the game show. To bring in the ideas about ‘breaking out of boxes’ from the second scene, we decided to change from a guessing game to ‘Identity Twister’. Panels labelled with different identities would be spread on the performance area, and with Sumita and Kath acting as the gameshow hosts, the rest of the participants would be ordered to stretch their limbs to connect with the multiple identities imposed on them! As the show went on, the players would become increasingly annoyed and finally call an end to the game of imposed identities, shouting ‘No! No! No!’ as they dismantled the playing area and tore up the labelled panels!

Ready to perform, the participants marched to the sun-drenched park area of the Level with multi-coloured banners billowing behind them. Performing in front of a relaxed audience who lay listening on the grass, we strained and fell over ourselves and each other as we tried to connect with all of the identities the gameshow host labelled us with. This is how we sometimes feel in our ‘everyday’ lives as LGBTQ people, struggling to manage the identities society and other people assume of us and box us into! Finally, with a cheer, we tore up our identities and took a well-deserved bow! Tired but pleased with the day’s workshop and performance, we headed off to relax at a nearby restaurant.

After the previous day’s success, on Sunday the research team from Kolkata and Brighton were really excited to run the next workshop, this time at the Brighthelm Centre. Even though some of us had acted as participants the day before, Sumita reminded us to expect something different by the end as every group brings their own unique experiences and ideas. It was another gorgeous sunny day and we had a lovely top floor room and a breezy rooftop to work in – once the seagulls had been chased away!

The second day began with similar sharing and trust exercises as the day before. Our 8 Sunday participants and the 2 research team members who were taking part got to know each other through a quick game of charades. Every person acted out one thing or concept which they felt described them or resonated strongly with them. We saw tigers, water, the sea, movement and a clock, amongst others! It was fascinating to hear everyone open up about complex aspects of their lives and identities through what seemed like a simple game.

Once again, Sumita showed us how to work to put scenes together, first as a small group and then involving all of the participants. Unconventional love seemed to be an ongoing theme in these stories – whereas Saturday saw a story about the love between a dog and a toad, Sunday’s story featured the ungendered Kim and a baby-faced vampire spending an evening together! Each participant chose a single line of the story to act out, considering how best to communicate the story and the intent to an audience through their movements and expressions.

Having come this far, we decided to break for lunch and chatted as a group. When the workshop began again, we took some paper and, as with Saturday, took time to answer Sumita’s three questions about our ‘liveable’ LGBTQ lives. Again, some of us decided to share some of our answers with the group, while others kept them to themselves – Sumita explained that this was a process to make us think about our own lives, not just to develop immediate ideas for the performance but also potentially to impact on our lives beyond the workshop. Through her process we could express ourselves personally about this idea of liveability, but without having to share things we felt uncomfortable about with the rest of the group.

This time we pulled out a number of ‘key words’ from our shared stories and experiences, with some additional words offered as we talked. At first there were 16 specific words in our list. The participants voted together to shorten the list, so that each participant could be matched with 1 word, with one participant left to be the presenter. The final list of chosen words was:

Each participant then chose a word, and prepared a short dialogue and accompanying actions based on it. This performance would be called ‘Words To Live By’. Some turned their word into a character, or explained what it meant to them personally. Others prepared a poem or a scene based on their word. We agreed that ‘Community’ should come last – so that we could all come together on stage as a community at the end.

We all thought that the beach would be a good place for our performance – the weather had stayed sunny, so we knew that there would be a lot of people for our audience! Travelling on foot and by car, we made our way to a busy but spacious area of the seafront and prepared our simple stage. A small audience began to gather immediately, made up of people of all ages. The first performance got a big round of applause, but since some audience members only arrived halfway through, we were asked for an encore performance! By now the participants were thoroughly engaged and energised – all nerves seemed to have vanished! As we came together at the end to form Community, and caught our fellow participant in our arms to show how our communities support us, we received another round of applause before having a big group hug! Through Sumita’s ‘I Script My Script’ process, as well as bringing our ideas to a public audience it felt like we really had become a little community of LGBTQ people.