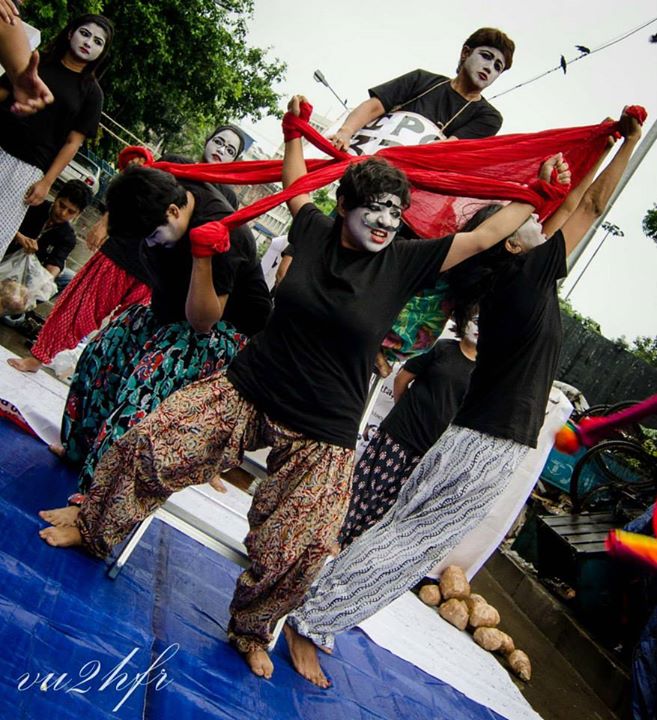 Excitement, whispers and high energy levels captured the beginnings of our project’s first theatre workshop. On the first day, the research team along with the participants sat down to brainstorm about the upcoming weeks of exercise of the mind and the body. We decided that other than carrying a few basic paraphernalia we will not prescribe anything else to the group, let them come up with a script, after all it was I Script My Script…

The day began with warm up exercises facilitated by Sumita concentrating on body movements that acted as an icebreaker. Following that, the 11 participants were divided into two groups for the rest of the day’s activities. Each group was asked to create one commercial and one item-number (and this is a particular “Bollywood” phenomenon where women wear extremely “provocative” clothes and dance to very peppy dance numbers, lyrics to which are sometimes misogynistic). Both the groups decided to present a commercial in the form of an item number.

Group 1 showed three ‘females’ teasing a fourth ‘female’, and group 2 showed a female Viagra advertisement with a same-sex twist. Both the groups later reflected about their presentation and the gender-sexuality aspects. Conversation included the act of teasing as male centered beyond the ‘biological body’ to how Viagra has ‘revolutionised’ male-sexuality but has always concentrated on heterosexual couples.

The same two groups were asked to coordinate amongst one another and create a silent tableau representing 5 scenes using each member’s body. The groups parted to brainstorm and create their scenes amongst a lot of excited chattering and a filming crew documenting almost every move of the workshop participants. After lunch and an energiser the two groups presented their silent tableaus with largely the same theme of same sex/gender love and its problems. Group 2 showed the immense violence faced by queer couples on a regular basis. With each tableau the violence increased culminating to a couple-suicide. Group 1 began with violence but in the last two scenes showed the couple recovering and turning to activism.

It was spectacular to see how similar the group dynamics were and how different the products… The day was definitely successful as the two tableaus were stitched together by the participants and a script was born!

There were debates on the processes that the group will take up for the street play—and we decided to have placards as dialogue, music fillers and of course exaggerated body movements. The locations were also decided after heated conversations about public spaces in Kolkata. As the evening drew nearer the group exchanged stories, decided characters and generally took ownership of the script and the performance. The group was given hand-outs that had short one-lined themes that they used to come up with some of the sequences. These themes were an preliminary set of ‘findings’ from the project workshops conducted in UK and India. Primarily the script took shape around the themes of violence and discrimination (that makes life unliveable) and community activism (that makes life liveable).

On the first day, we had also decided that we would create leaflets to distribute to the audience, which could contain some information and awareness about the realities of LGBTQ persons and Sappho for Equality’s contact information.

The two days following the opening workshop day went to rehearsing and modifying some of the scenes. An important event that took place on the second day was deciding the scene arrangement and micro-tweaking. By this time we had critical feedback from the participants as well other non-participating SFE members. One of the major issues that came up was that we needed to incorporate different forms of violence and discrimination, both overt and covert. Over the years the nature of violence and discrimination has changed and therefore we wanted to show the variations in the performance. Therefore, in keeping with this, one of the scenes that were supposed to happen in an outdoor setup (a street) was changed to a scene in front of a public toilet. Another interesting issue came up from the group during another critical discussion was the medical fraternity’s treatment to homosexuality and LGBTQ persons. A new scene was born which was inspired from a real-life story of a young man and his struggle with his family’s extreme violence after he tried to “come out”.

The arrangement was symbolic as it opened with a scene at a garden/park where same-gender lovers were abused; following this was the public toilet scene where a transman was refused entry to the “male” restroom. The next scene showed familial violence when two girls were forced apart by their respective sets of parents with physical and emotional violence; the second last scene was that of a gay man’s trials and tribulations at a mental hospital. The ending was a culmination of all these repeated scenes (and spaces) of violence coming to an abrupt end when a “human” (with no gender-sexuality markers) came out to literally ‘topple off’ the looming IPC 377 which criminalises same-sex relations in India. The slogan “bhoy dekhale bhoy pabona jene rekho/ aamaar bhasha aamaar bhashyo mone rekho” ('threaten me as you want / but remember, I will script my own script') was supposed to bring the play to a thundering end.

What was a particularly important discussion was the possibility of using live music to gather crowd right before the performance starts, but in the end the group settled with a recorded version of the song written by Sumita and inspired by the gombhira (a rural/folk dance-music format) musicians. Day three consisted of song recording and rehearsals with all the group members. Since the mutual decision was to keep language to the minimum the participants had to master body movements and synchronise all collective actions; therefore performing live music before the actual performance was not something that seemed achievable. The video documentation team who had been following us around from the initial parts of the theatre workshops helped with recording and mixing of the song.

We had initially tried to organise and coordinate additional rehearsal date but due to the conflicting schedules of the participants this could not be managed. On the day of the performance the group assembled hours before to do a final dress rehearsal before we reconvened for the event. Everyone looked peaceful yet excited and the last few rehearsals were showing the connections becoming stronger amongst the group and the team in general. It turned out to be a really wet, rainy, sultry day but once we left the practice-pad the sprits were soaring. A convoy of face-painted young (and a few old) persons traversed selected streets of Kolkata with much cheering and nervous laughter. The first performance was done at Y-Channel, Esplanade, which is right at the heart of the business and commuting (from suburbs) area. There was a small market and a large bus terminus right next door so we attracted vendors, merchants, travellers, passer-byes, friends who were invited and some unlabelled strangers. We began by setting up our equipment, playing the song on our portable speakers, and soon after many people gathered, curious and waiting to see what would happen. By this time, our volunteers had already started leafleting. The performance soon followed for the next 15 minutes approximately, with drizzles of rain and mud and some glorious faces. The participants engaged the audience soon after the performance ended, recorded audience response and then buckled up for the next destination: in front of Academy of Fine Arts.

The second performance was in front of a different audience that included students, artists, movie-lovers, and of course the couples looking to spend some time together on a Sunday evening. There was already a small crowd and once again when we started to blare the catchy folksy song people began to gather around the small dais. The second performance started smoothly as the performers were much more relaxed but their energies and connections were stronger than before. By the end of the play there was a big crowd and the audience interaction highlighted some importance concepts carried by ‘non-LGBTQ’ persons, some of whom were empathetic while others ranged from ignorant to outright offensive. The rains had completely stopped by the end and some of our friends from other organisations gathered to cherish a memorable experience of taking over the streets. It was pertinent also because the USA Supreme Court legalised “gay marriage” only the previous day so people were particularly aware of the on-going global discussions around LGBTQ politics.

The day ended with the I Script My Script team returning to Chetana Resource Centre tired, haggard and so very accomplished. After a gruelling day of overwhelming emotions and extreme physical exertion we all decided to end on a happy note with a new agenda of a success dinner.

The theatre workshop and performance across June 2015 was as some participants highlighted, a part of our collective liveability. It spoke of violence, discrimination, resistance and community bonding. The song, the slogans, the placards which were used to communicate with the audience was entirely the outcome of inventive thinking and deep reflections by the team members. What could be better advocacy than engaging people on the streets and showing them what our un/liveabilities mean…