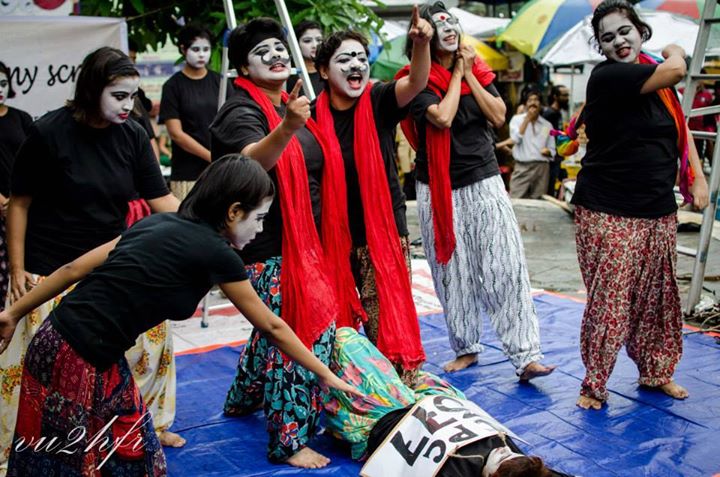 Please click here to view the full Kolkata performances. You can also find out more about team member Sumita's 'I Script My Script' street theatre workshop process. Please be aware that the explanation contains some potentially upsetting imagery of LGBTQ-related abuse.

Notes: Two steps ladders are used to set the scenes. In scene 1 they are used as two trees, scene 2 they are two sides of the public toilet, in scene 3 they are two houses, scene 4 one is the mental asylum and other is the stretcher-cum-ECT machine, scene 5 one is taken out and the other is the seat for IPC 377 (Indian Penal Code no. 377, a draconian law created by the British in 1870 and still in place which criminalises homosexual acts in India). A song was created as a crowd puller, using a folk form (Gambheera) from North Bengal.

Let us think, let us act

And let us make a solid pact

That we will not disregard anyone . . .

You and I and we have

Right to live and right to love

Are you tough, are you coy

Trans, queer, are you shy

Two participants are two trees. Below Tree 1 sits a ‘heterosexual couple’, below Tree 2 sits a ‘homosexual couple’. Both are engaged in different acts of ‘romance’. Both couples are ‘romancing’ in a similar way.

One tea and one peanut vendor are hawking in the park. They are both making faces at the ‘homosexual’ couple. ‘Homo case, 377, two girls in love’ can be heard. The ‘heterosexual’ couple was also participating in the abuse. A crowd (public) collects and start chanting—‘dirty, pervert, sick, criminal, psycho, unnatural’—‘unnatural’ is being repeated while they are pushed off-stage throwing ‘stones’ (made out of old news papers and musk tapes)at them. This action is repeated in every scene.

The two trees come front-stage and one of them picks up a placard reading unnatural; asking the audience what it means through sign language. The other tree signals in a morose way that it doesn’t know.

Chorus: “Gaachhera bolena aswabhabik adalati katha bole / manusher katha manush bhabena samajer mate chole” (Trees won’t tell you what is unnatural, the court would direct you / a human won’t spare a moment for another, rather would listen to the society)

A public toilet; two persons sitting top of the ladders holding ‘male (moustache)’ and ‘female (bindi)’ signs. Two women wearing red dot on their foreheads (bindi) as sign of a female enter the stage and enter the ‘female’ section. One of them pays while the other doesn’t. Gatekeeper (of the public toilet) stops the woman who was about to enter without payment; who ultimately gives money unwillingly. A man (with a moustache) hurriedly enters the ‘male’ toilet after paying. A transperson (with bindi and moustache both) comes on stage and looks at the two signs (male-female) and ponders for sometime and decides to enter the ‘male’ section. The gatekeeper blocks the way and points at his bindi on his forehead, to which he shows his moustache. The ‘man’ comes out of the toilet in the meantime and the gatekeeper points to his moustache as an example of ‘male’ness. A heated argument breaks out between them and the two women who had previously entered the toilets come out and support the transperson. The ‘public’ comes on-stage and start abusing them and pushing them off-stage. Two people come down from the ‘toilet’, pick up a placard with the word pervert written. They both ask what it means and ultimately leave without an answer.

Chorus: “Bikrito tumi, samaj bolechhe, samaj toh shob jane / khuni dhorshok par peye jay bhalobasa har mane” (You are a pervert, society tells you, society that knows all / the murderer, the rapist can get away but the lover will go to jail)

Two houses (two people on two houses as roof). Two sets of parents come out one after the other. One set of parents try to coax and cajole the girl to leave her lover, the other set of parents physically hurt their daughter and forces them apart. They scream out “Ma, please don’t hit me anymore…Papa please let go of me.” In the commotion a gender-neutral person comes out and tries to stop the violence but the crowed comes out and chases the couple and the person who was saving them off stage. The two people climb down and pick up a placard with criminal written and ask what it means. Yet again without a response the two people leave.

A gay man is brought to the doctor on a stretcher by his family. The doctor examines him while the father, mother and sister wait and cry. The doctor decides to give him electroconvulsive (shock) therapy and prepares with the help of two male nurses. The family leaves him even though he begs them not to. He picks up the poster with ‘Mental Asylum’ written on it and asks the audience silently whether he deserves to be treated this way.

Chorus: “Kake bole rugi, kei ba sushtho, hisheb melena ar / bhalobasha paye roger takma, samaj je daktar” (Who is diseased and who is not, it’s hard to tell you now / love today is the disease as society is playing the doctor)

One ladder remains at the centre stage. IPC 377 enters and takes seat right on top of the ladder. Three persons pull violently three others—a transman, a gay man and a lesbian woman to centre stage with red dupattas  (body scarf) around their wrist. The three people hand over the three other to IPC 377 at which point a chanting begins “Samakami nari hay hay, samakami purush nipat jak / modda meye hay hay, mouga chhakka nipat jak” (homo woman shame shame, homo man go to hell / butch woman shame shame, femme man go to hell) and the three centre stage performers start a puppet-like movement with IPC 377 as the puppeteer. The three persons who had brought them on stage are standing and watching the performance and clapping in enjoyment. In the middle of this performance another person (gender-neutral) enters the stage and tries to stop the puppet-show—eventually throws a rainbow coloured dupatta at IPC 377 who promptly (and confusedly) catches and the gender-neutral person yanks on it to bring IPC 377 crashing down.

In the second cry, the people from the background join in to sing the last slogan of the play.