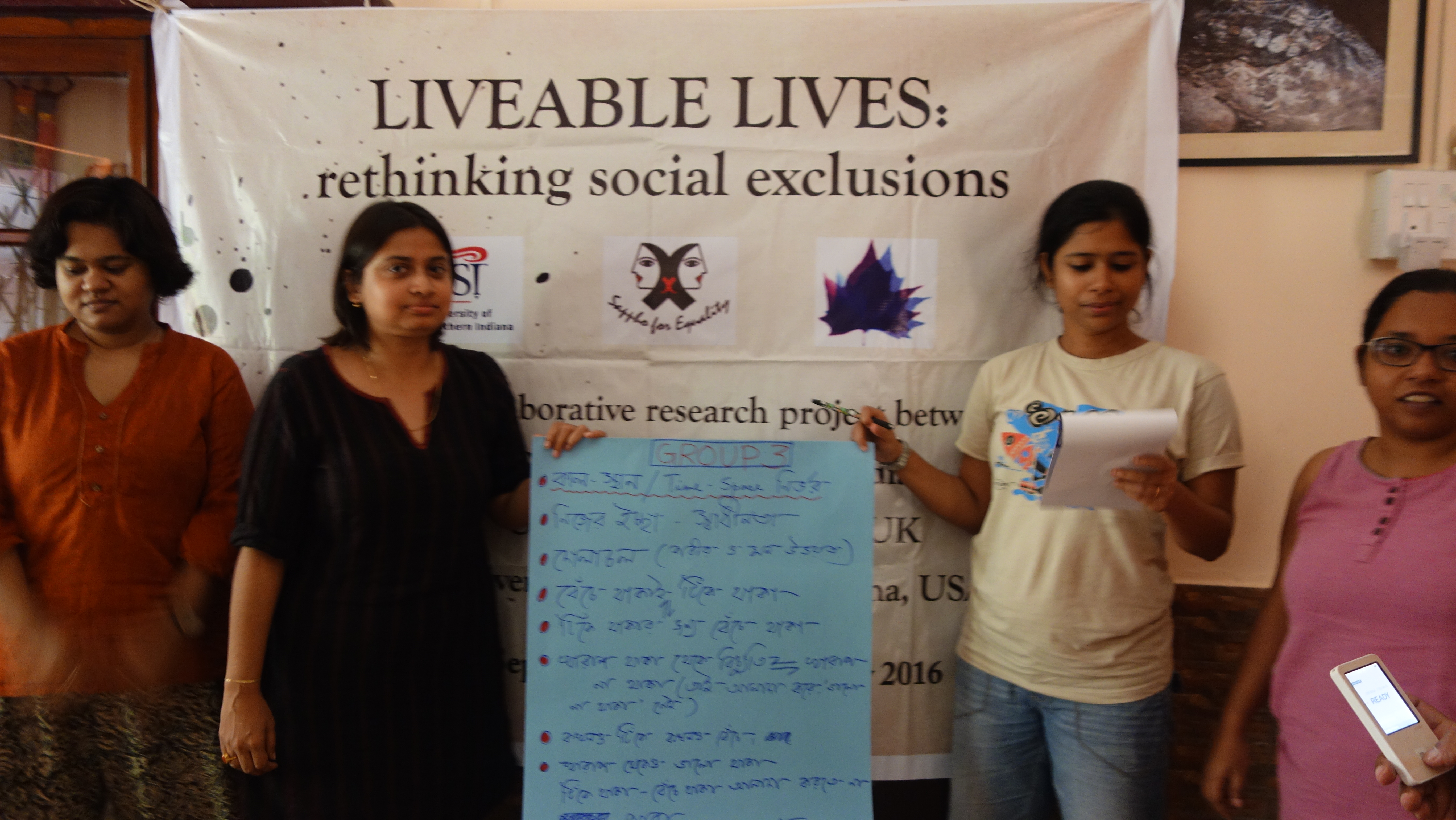 To end the Liveable Lives Project Workshops in India we had the second and final part of the two-part workshop with Sappho for Equality members. This time the research team members also participated, as they did not want to only ‘observe’ as researchers; ‘observant participation’ was therefore key to this workshop. So there was a big group of 13 participants that included three of the core research team members. The session began in high spirits and included old and new members of the organisation. We followed the same processes as the previous workshop with other Sappho and Sappho for Equality members.

We started with a very brief introduction of the project, as most people already knew about Liveable Lives. The facilitators introduced three cues to start the conversation: "benche thaka kake bole; tinke thaka kake bole; bhalo thaka/na thaka kake bole" (what is living; what is surviving; and what is being well/unwell).

The group had a mix of old and new members of Sappho and Sappho for Equality who were divided into three smaller groups to do a presentation on the questions posed to the house. The groups had been selected after long debates about comfort levels so that every person got a chance to speak their mind within their respective groups. A few of the interesting points that came up during the presentation/discussion was that liveability is a relative thing and is wholly dependent on time-space. And as LBT individuals everything listed during the discussion about liveability had a gender-sexuality angle if not evidently so—the LBT identity is inextricably linked to our bhalo thaka (doing well) and kharap thaka (not doing well).

The next group pointed out a very interesting dilemma—one of the participants had been through a near-death experience in the Nepal earthquake and mentioned that to her a simple act of breathing is as much survival as it is living. Freedom to express and being accepted as ourselves is fundamental to living. In fact a participant said that if we look beyond our lives and our dissatisfactions then maybe we would have better lives.

The last group compared their living to their struggle within the movement. To live is to be conscious and create conversation and facilitate understanding amongst community and non-community members, “the fight to live is my survival”.

Is living equivalent to living well, or does survival mean something bad necessarily? Within the struggle of living and surviving, neither should be epitomised as good/bad, it is a “porous movement” when sometimes survival is living and living becomes survival. Situations, layers, and different identities make up our lives that include being well and being unwell.

The next three sessions of life-matrix, collage making, and questionnaires reflected the above-mentioned points. A larger theme of struggle, revolution and movement-activism was embedded within the workshop data… to fight is to know that we are all alive, and sometimes being alive is living well. The research-team members also joined in to give extremely valuable insights as a group and as individuals. Living queer, living well, living happy, living in complications—all these make up our lives as individuals and as a part of larger collectives.