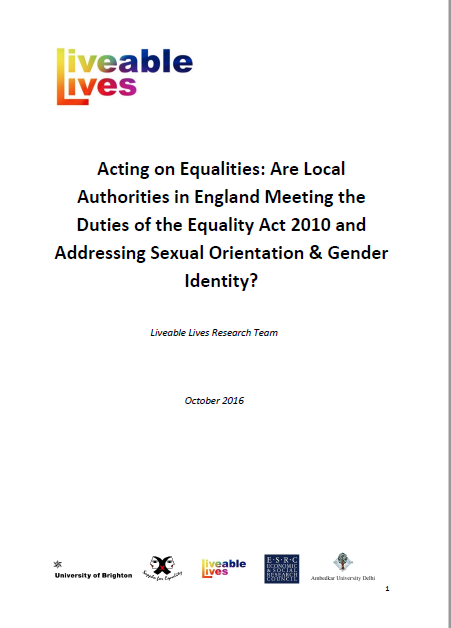 In late 2014 and mid 2016, the Liveable Lives project gathered data to help understand exactly what each of the 353 local councils in England is doing to meet their duties under the Equality Act 2010. We have now published our report which explores if, and how, each local council is meeting their duties. The report also looks at LGBTQ-specific work being done by councils, and issues surrounding same-sex marriage and civil partnerships.

Our findings also show that between 2014 and 2016, whilst there was an increase in the number of councils providing information on same-sex marriages and civil partnerships, there was a decrease in the number fulfilling the requirements of the Equality Act 2010. One third of those councils fully promoting same-sex marriage were found to be doing either no, or very little, LGBT work.

Overall, the research found that by August 2016 of the 353 local authorities in England:

Other key findings include:

Commenting on the research findings, Research Team member and Principal Investigator, Professor Kath Browne, said: “It is clear that there are issues with local authorities’ compliance with the Equality Act 2010 and it is a cause for concern that compliance with this legislation appears to have declined.

“Whilst some local authorities noted that austerity has been a contributory factor, with budget cuts having an impact on equalities work, others seem to be more focused on justifying what they are not required to do under the legislation. Despite this, 10 percent of local councils were able to be more compliant.

“Many local authorities are doing good work in relation to LGBT equality – including, ironically, some who do not demonstrate observance with the legislation. But it is clear that those councils who do demonstrate compliance are doing more meaningful things.

“It is particularly interesting to see that more local authorities promote same-sex marriage – even though there is no legal obligation to do so – than undertake LGBT-specific equality work.”